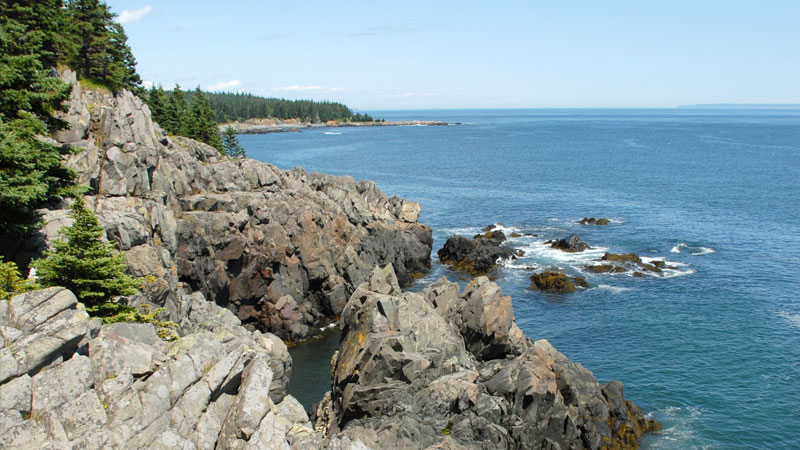 Eastport, Bay of Fundy, and Campobello

Running from the eastern shore to Machias Bay to the Bay of Fundy, the area referred to as Eastport, Bay of Fundy, and Campobello has much to offer visitors willing to make the trip.

On the rocky shore, east of Machias at a sharp bend in Route 191, sits the hardworking fishing village of Cutler. The Cutler coast boasts some of the most dramatic hiking trails on Maine's coast, thanks to the thousands of acres of public land managed for recreation and wildlife habitat. The Little River Lighthouse sits on a 15-acre island at the edge of Cutler Harbor, where boat transportation is available.

Catch a ride to Machias Seal Island where from April to August, one can spot thousands of Atlantic puffins. Thousands of thousands of waterfowl, songbirds, shorebirds, and raptors migrate southward through Cross Island National Wildlife Refuge each fall. Because the tidal powers of the Bay of Fundy become increasingly apparent from Cutler eastward, it is advised one charter a boat tour or hire a kayaking guide to view this remote island refuge safely.

Just 30 minutes further on is Lubec —the easternmost town in the U.S. and famous for its iconic red and white striped West Quoddy Lighthouse. The park and local preserves provide visitors with views of the rugged coast that inspires the vibrant arts and culture scene. Downtown Lubec is an active community with many public events, shops, and dining options. 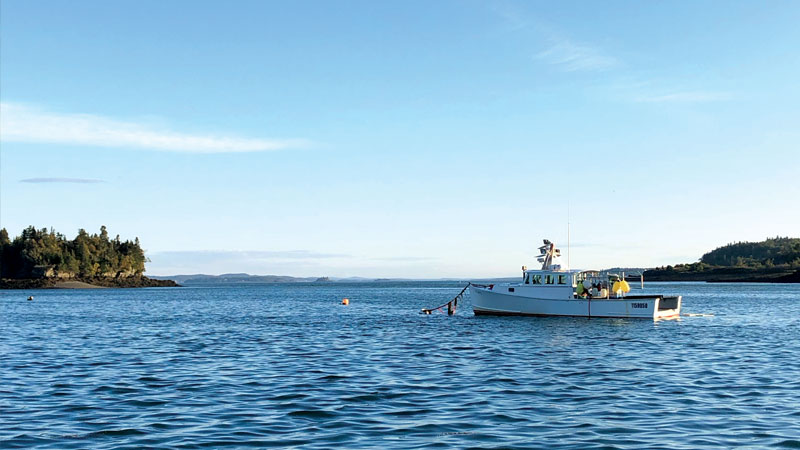 Lubec is an international community, as the gateway to Campobello Island, New Brunswick, Canada. Campobello is home to the Roosevelt Campobello International Park, which features President Franklin and Eleanor Roosevelt's summer home, Tea with Eleanor, and numerous hiking trails. Passports are required.

If you head back west on Route 189, you will reconnect with Route 1 in the tiny town of Whiting. Considered the gateway to Cobscook Bay, each spring, it plays host to the Down East Spring Birding Festival. The Orange River Conservation Area has two public boat landings to get visitors on the water.

Heading north on U.S. 1 toward Eastport, you will travel through the towns of Dennysville, Pembroke, and Perry. Dennysville will take you back in time with nearly two dozen Colonial Revival and Federal-style buildings in its Historic District.

Pembroke, originally called Pennamaquan, is home to reversing falls, which change direction with the tide, are part of the beauty and power of the bay, and can be viewed from Reversing Falls Park. There is a strong local tradition in horse racing, evident on the racetrack at the Pembroke Fair Grounds. The fair was first held in 1841 and is one of the oldest in the country.

The town of Perry, located along U.S. 1, sits at the 45th Parallel, halfway between the Equator and the North Pole. A marker stands on Route 1 and offers a chance for a unique souvenir photo! At this point, one can either turn north to Calais or south to Eastport.

On the way down the point to Eastport along Route 190, drivers pass through Pleasant Point, or Sipayik in Passamaquoddy, one of two Indian reservations of the federally recognized Passamaquoddy tribe in Washington County. You can learn more about the region and the Passamaquoddy's rich history at their museum. 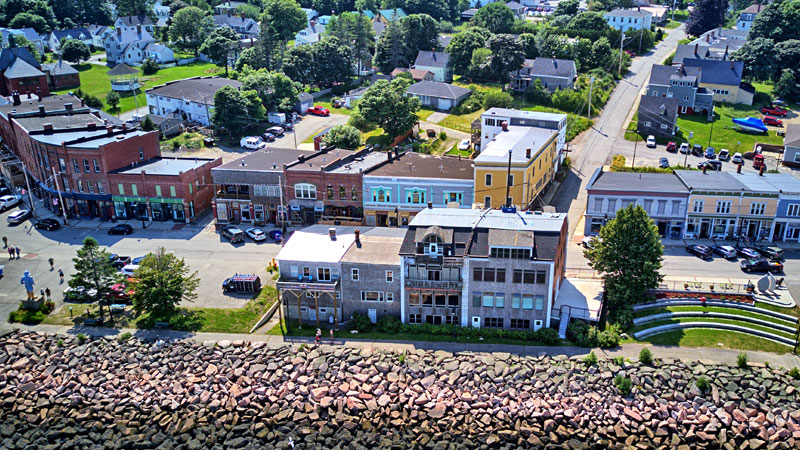 Eastport is a small city consisting of an archipelago of islands stretching out into the bay, joined by a series of causeways. The easternmost city in the U.S. the downtown contains intriguing shops, restaurants, and cafes. Through efforts of organizations such as the Tides Institute, Eastport is preserving its history and creating a diverse cultural community. The tides and currents of Passamaquoddy Bay bless the area with rich waters for fishing and create tricky hazards for the unwary, such as the Old Sow whirlpool. Gleason Cove is a perfect place to have a picnic and view the remnants of herring weirs that once fed the canneries in Eastport.

Back up Route 1, past Perry, is Robbinston, located where the St. Croix River meets Passamaquoddy Bay, it was once a major shipbuilding center. Charming historic summer "cottages" with architectural gingerbread line the shore. Brewer House, a beautiful historic mansion, was once the Underground Railroad's last U.S. stopping point before escaped slaves were transported across the bay to the Canadian shore and freedom. 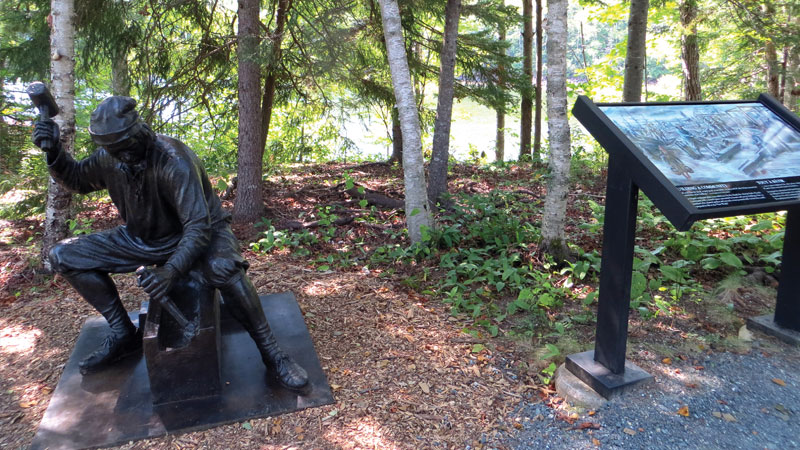 Just north of Robbinston in Red Beach, you can visit the St. Croix Island Historic Site and learn about the disastrous first attempt of the French to establish a permanent settlement in North America.

Calais is the largest municipality in Washington County and acts as the primary Maine gateway to Canada. The city was named Calais after the French town to honor French assistance during the American Revolution. Closely linked to the St. Croix River and the town on the opposite shore, St. Stephen, New Brunswick, it is a perfect jumping-off point for a Two Nation Vacation.

To the north on U.S. 1, you'll find the Moosehorn National Wildlife Refuge and Baring Plantation — which lies at the end of Route 9, which provides a link to the interstate and Bangor. The town of Charlotte is located on the southern side of Moosehorn National Wildlife Refuge. Snuggled among the rolling hills, Charlotte is a farming community with abundant outdoor activities, including fishing and boating on Round Pond and Pennamaquan Lake. The Downeast Sunrise Trail begins at Ayer's Junction in Charlotte and links to the East Coast Greenway, which stretches the entire eastern seaboard to Key West, Florida.

Nearby, Cobscook Bay State Park offers camping, hiking trails, and plenty of places to view the area's powerful tides. The features of the bay make it nutrient-rich, attracting numerous types of wildlife, both terrestrial and aquatic. This part of the world offers the chance to explore the night skies above us, which is possible in part due to the lack of light pollution found elsewhere.

Peacock House Bed and Breakfast
The Peacock House B&B was built in 1860 by Sea Captain William Trott. Guest will be greeted with a warm smile and friendly hello by on...

Artists Retreat Studios & Gallery
First, it's a working studio gallery. It features the kaleidoscopic imagery and fabric creations of Trina Stephenson and the fine art...

VisitLubecMaine.com - Lubec's One-Stop Website
Lubec and the surrounding area offer the self-initiating a variety of seasonal and year-round activities such as: Kayaking and...

Home Port Inn & Restaurant
Built in 1880 and situated on a tree-shaded, church-lined street in the easternmost town in the US, you'll experience a relaxed, comfortable...

Arts and Culture in the Lubec Area - Educational & Enjoyment Opportunities
Explore the Arts and Culture of Way Down East - Lubec and the Cobscook Region. Come Visit and Vacation in Lubec Maine! In recent years,...
Loading...
Show More ▼
Deals