DownEast Acadia's collection of twenty-seven lighthouses attract visitors from all around the world while still keeping vigil over our rocky coastline. The region is home to more lighthouses than the rest of Maine combined. The information provided will help you plan your approach—by land or sea…or both. They are ordered from westernmost to easternmost in the region.

At the mouth of the Penobscot River, Castine has a colorful history. Initially settled by the French, it was occupied by the British during the American Revolution and the War of 1812. Dyce Head Lighthouse was built in 1828 to serve as a guide for mariners headed to Bangor, then a leading lumber port. The lighthouse is close to Maine Maritime Academy and easily reached by driving to Castine on Route 166. The grounds are open to the public, but the keeper's house is now a private residence.

Authorized in 1852, the light marks the entrance to Eggemoggin Reach. In the 19th century, this area was heavily traveled by vessels carrying lumber as well as summer pleasure craft. Privately owned today, the light can be seen easily from the shore of Little Deer Isle at the end of Eggemoggin Road and from the water or the air.

Established to aid navigation toward the Penobscot River, Keeper Ralph Banks, 1949-52, stated that the light is the "best-looking lighthouse from Maine to Texas". Now maintained by the Eagle Light Caretakers, the grounds are open, the tower is closed.

This 25-foot square tower, built in 1857, stood sentinel over a busy waterway in the 19th century because of the granite quarries in the area. An explosion and fire destroyed the keeper's house in 1958, so the Coast Guard removed all of the buildings except the tower. The Island Heritage Trust now maintains it.

The lighthouse was built in 1907 for $14,000; it is the last traditional style lighthouse built in Maine. The tower is set slightly offshore and reached via a wooden walkway. Today the keeper's house is privately owned, the Town of Isle au Haut maintains the lighthouse, and the light is solar-powered—remaining an active aid to navigation.

The lighthouse was established in 1857 by authorization of President Franklin Pierce to help guide mariners into Eggemoggin Reach. Best seen from the water, it is now privately owned, having been restored in 1995.

First charted by Champlain, Swans Island—called Brule-cote or Burnt Hill—was used by natives as a summer fishing and hunting spot. It later developed strong granite, fishing, and lobstering industries. We will celebrate 150 years of the light in August 2022!

The lighthouse is maintained by the Town of Swans Island and is reached by a 40-minute ferry ride from Bass Harbor on Mount Desert Island.

The newly-restored keeper’s house and light tower are open to visitors in the summer. Learn more and plan your visit: www.burntcoatharborlight.com.

The Bass Harbor Head Light has been standing watch over the entrance to Bass Harbor on the southwestern side of Mount Desert Island since 1858. This white brick and stone lighthouse—the only lighthouse on the island—is one of the most recognized and photographed in the United States. READ MORE. 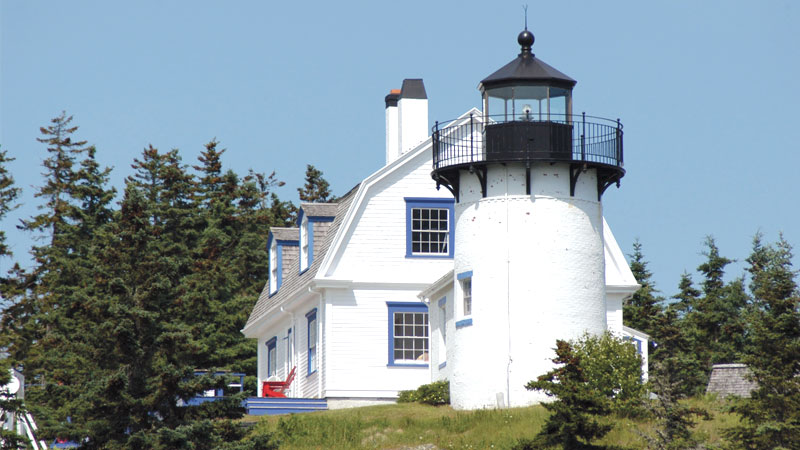 Bear Island, near the town of Northeast Harbor on Mount Desert Island, is one of a group of islands that make up the Cranberry Isles. The light was authorized in 1838 to help mariners entering Northeast Harbor and Somes Sound. Today the lighthouse is maintained by a private individual under a lease agreement with Acadia National Park. Best viewed by boat, some of the ferries and sightseeing cruises in the area pass the island.

Authorized in 1828 by President John Quincy Adams, the present 43-foot brick tower was built in 1855. Today the keeper's house and grounds are maintained by Acadia National Park while the Coast Guard still maintains the active lighthouse. Local tours sometimes offer summer excursions to the island with Acadia National Park naturalists on board.

This 42-foot brick-lined granite tower was built in 1890 is currently maintained by the College of the Atlantic in Bar Harbor. It remains an active aid to navigation and can be viewed by water.

"Mount Desert Rock is the farthest land on which a New England lighthouse shows its warning light in the window," wrote Samuel Adams Drake. The light, one of the most isolated of all lighthouses, is now managed by the College of the Atlantic as a whale watching station. It is best seen by boat or air. 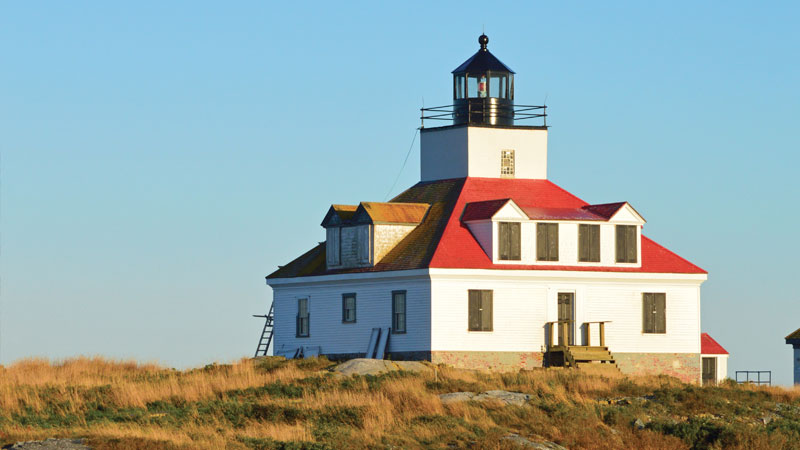 The rocky outpost, also known for a time as Gull Island, was named for the proliferation of seabirds' nests and eggs found there. Due to increased ferry traffic, Egg Rock Light was built in 1875 and is one of coastal Maine's architecturally unique lighthouses, with a square tower projecting through the square keeper's house. Egg Rock Light is not open to the public but can be viewed on numerous scenic boat cruises. READ MORE.

Winter Harbor has long been a favorite safe harbor for mariners seeking shelter from storms. The light was built in 1856 to guide vessels to the port and warn of dangerous ledges. Privately owned, the lighthouse can be viewed from the loop road in Acadia National Park's Schoodic section and tour boats. 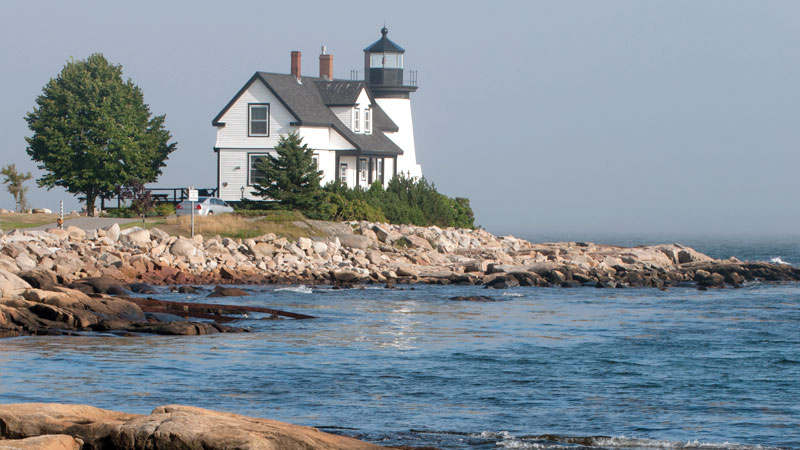 The light was authorized in 1817 to warn about a treacherous sandbar running between Petit Manan Island and the mainland. The present 119-foot granite tower is the second tallest Light in Maine and can be seen distantly from Petit Manan Point. Puffin watch cruises go close to the island, which also supports colonies of several tern species.

During the 19th century, the little town of Milbridge was an important shipping point for lumber coming from the Narraguagus River. The light was initially placed on top of the keeper's dwelling. In 1875 a new house was built, and the original was removed from around the tower. The privately-owned lighthouse is best viewed by private boat. 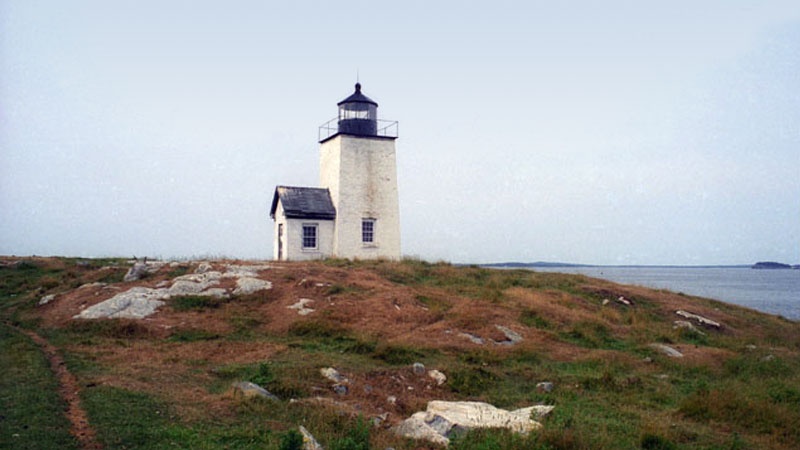 In 1837 Congress authorized the building of a lighthouse at the mouth of the Pleasant River. In 1947 the Coast Guard destroyed all the structures except the tower. The Friends of Nash Island Light have restored the light's exterior. The island is closed from April through August to protect nesting seabirds. Grounds open seasonally, tower closed.

President John Quincy Adams authorized the building of this light on the easternmost point of Mistake Island, about 5 miles from Jonesport. The light is still an active aid to navigation, though, in 1982, a military team blew up the keeper's house as a training exercise. Moose Peak can be seen distantly from Great Wass Island by private boat or plane.

Libby Island Light stands at the east entrance to Machias Bay. Libby Island is two islands connected by a sandbar. An earlier wooden lighthouse may have been erected as early as 1817. The lighthouse today is owned by the U.S Fish and Wildlife Service and can be seen distantly from the mainland but is best viewed by private boat. 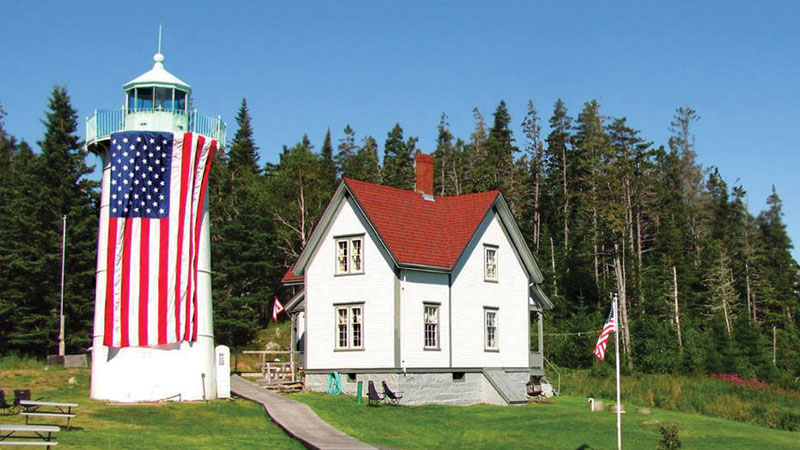 Cutler, on Maine's rugged "Bold Coast", is a town of under 800 with an active fishing fleet and a picturesque waterfront. The American Lighthouse Foundation owns the island and restored the light station. The lighthouse can be viewed from a local tour boat, but cannot be seen from the mainland.

As tiny Machias Seal Island is located roughly 12 miles from the nearest points in the United States and Canada, it is understandable that both countries have claimed sovereignty over the island. Two octagonal wooden towers and a keeper's dwelling were built on the island in 1832. Newer towers were built in the late 1800s. The island can be visited on Puffin Trips out of Cutler and Sea Watch Tours out of Grand Manan, Canada. The Canadian Coast Guard manages the site.

The iconic red and white striped light stands on the easternmost point of the United States' mainland. The first tower was built by the order of President Thomas Jefferson in 1808, the current one in 1958. At one time, the station had a fog cannon and received the nation's first fog bell in 1820. The grounds are open to the public. Trails go through the park, along the shore, and past the lighthouse. READ MORE.

In the late 19th century Lubec, the most northeasterly town in the United States, was an important trade and fishing port. The light was built at the harbor's western entrance and is one of three surviving "sparkplug' style cast-iron lighthouses in Maine. The light remains an active aid to navigation but is now is privately owned. It can easily be seen from many points onshore. 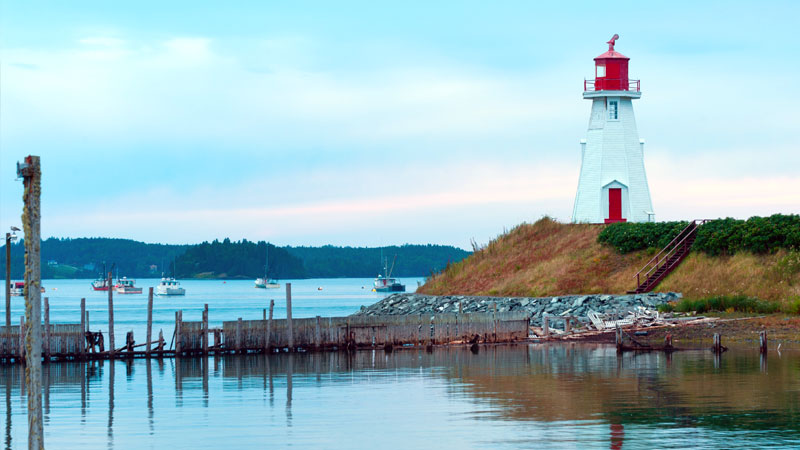 Built in 1885, the light is now part of Roosevelt Campobello International Park. While visible from the F.D. Roosevelt Memorial International Bridge between Lubec and Campobello Island, it is not a functioning lighthouse. The lighthouse is in Canada, so you will need a valid passport issued by the country you are from to get across the border and back.

Head Harbour—or East Quoddy—Lighthouse was built in 1829 on a small, rocky islet, located off the northern tip of Campobello Island, New Brunswick. It is accessible by land only at or near low tide by a road between the north end of the island and Wilson's Beach. Recognized by a fifty-one-foot-tall wooden octagonal tower with a large red cross painted on the eastern side, Head Harbor Lighthouse was the first lighthouse constructed in New Brunswick outside of the Saint John Harbour. This lighthouse is located across the border in Canada, so you will need a valid passport issued by the country you are from to get there and back. READ MORE.

Whitlocks Mill Light is the northernmost lighthouse in Maine and the last lighthouse constructed in the state. The original light was a lantern hung in the tree at a bend in the river by the local mill operator, Mr. Whitlock. First established as an authorized light station in 1892, the present complex was built in 1910. In 1999 the tower was deeded to the St. Croix Historical Society as part of the Maine Lighthouse Program, a precursor to the National Historic Lighthouse Preservation Act.

Windjammer Cruises
Relive the golden years of sailing aboard a Windjammer. Most of these ships were built at the turn of the century when America still used...

Pretty Marsh
The scenic hamlet of Pretty Marsh borders Blue Hill Bay on the western edge of Mount Desert Island. The Pretty Marsh Picnic Area, part of...
32
Loading...
[6 of 32]
Show More ▼
You Might Like

Bar Harbor Lobster Fishing and Seal Watching Tour
She has the most room for your comfort and is the only area lobster tour with a live aquarium touch tank so you can hold a lobster, sea...

Sea Princess Cruises
Locally owned and has operated out of the calm and sheltered waters of Northeast Harbor for the past 40 years. There are four unique trips...
Loading...
Show More ▼
Events