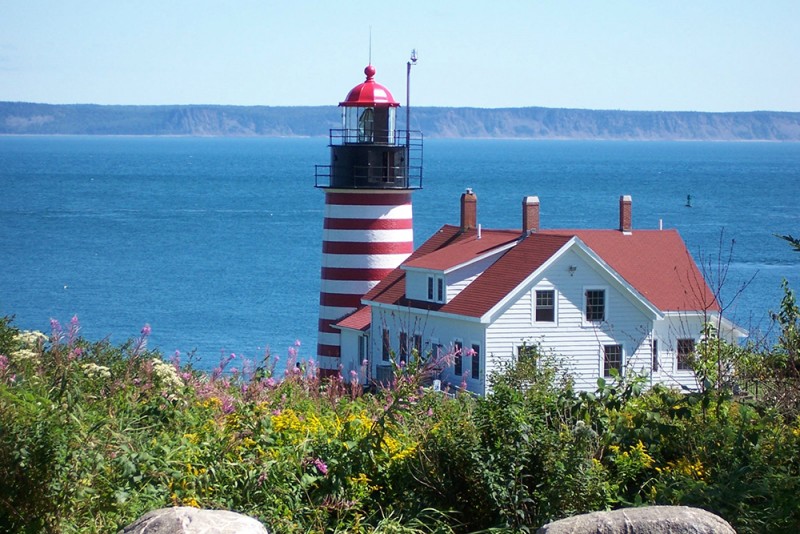 Quoddy Head State Park encompasses 541 acres at the tip of America's easternmost peninsula, offering opportunities to visit an historic lighthouse, picnic and hike up to 5 miles of scenic trails. From the candy-striped West Quoddy Head Light, Maine's easternmost lighthouse, visitors can look out over Quoddy Channel (which divides the U.S. and Canada) to the towering red cliffs of Grand Manan Island in New Brunswick.

Commissioned by President Thomas Jefferson, West Quoddy Head Light was first built in 1808. The present tower and house, which date back to 1858, were staffed by resident lightkeepers until 1988 when the U.S. Coast Guard automated the light.

The Park affords some of Maine's best wildlife-watching. Visitors in summer may spot humpback, minke and finback whales offshore, along with rafts of eider, scoter and old squaw ducks. Kittiwakes, gannets, black-bellied plovers, ruddy turnstones and purple sandpipers all can be seen at times roosting on Sail Rock. During spring and fall migration periods, hundreds of shorebirds congregate near the Park's western boundary at Lubec Flats and Carrying Place Cove (named for a canoe portage site that Native Americans used). Birding opportunities continue into winter, with sea ducks, murres, and razorbills offshore and frequent bald eagles.

State & National Parks
In addition to Acadia National Park on Mount Desert Island which is our world famous national park, DownEast and Acadia has many State Parks...

Join us for a chili supper with live music on February 7th! Escape the cold weather, and come enjoy...

Learn the centuries old craft of rug braiding! Over four weekend classes, students will use recycled...

Are you happy with the photos you take that capture the moments in your life? Add some adventure to your vacation in Camden and learn to maximize the potential of your smartphone camera. Spend an afternoon exploring Mid-Coast Maine with professional...

16TH ANNUAL PIES ON PARADE GALA WEEKEND EVENT JANUARY 24 – JANUARY 26, 2020 Do You Love Pie? Well if you do, we have the perfect lodging package for you! LODGING PACKAGE Your package (requires a two night stay*) includes: Two personal pies baked just for...